At the edge of the French internet, at the address http://www.kraland.org, there is a website whose design hasn’t changed very much in twenty years. 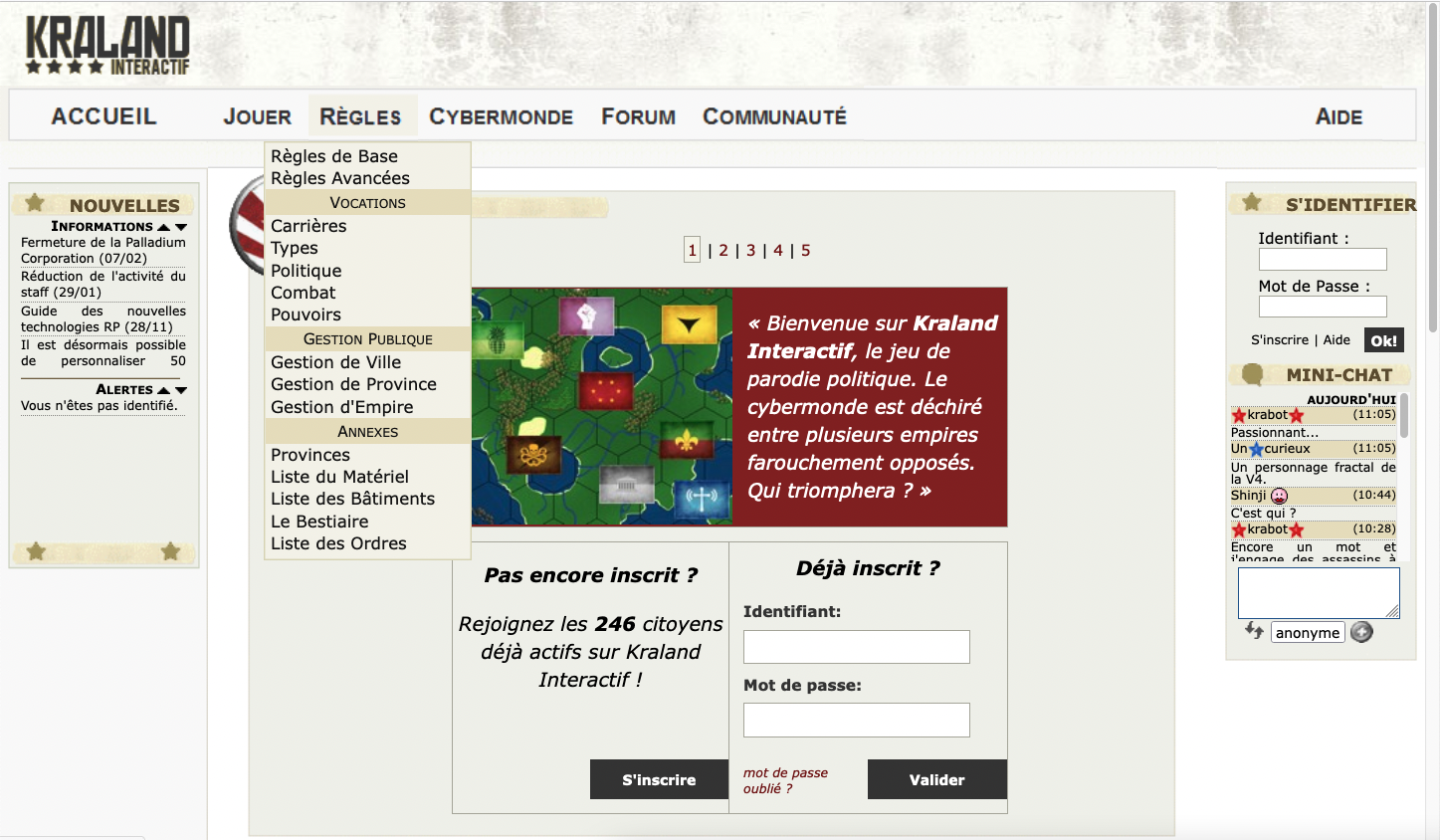 There is a vertical menu on the left and a horizontal one on top. A plentiful dropdown list appears when the cursor hovers one of its headers. On the right, we find a minichat controlled by an automatic bot that has been developed something like fifteen years before the chatbot trend. There is also a form to log in, using a username and a password. Mine is just five characters long and would put all my other long and excessively complex auto-generated passwords to shame. I never changed it, because there is nothing to see and nothing to steal, there are only memories left.

The top link “Forum” redirects to a home-made forum divided into many categories, some being quite unusual. The “Culture” section made me a cinephile, but the “Politique & Société” one failed to make me a Marxist-Leninist. 99.999% of the discussions are gone forever. In 2005, database storage was expensive and running queries was too, a free website could not afford this. A system to delete all the posts and topics older than a few months has been developed to remediate to this. It has never been deactivated.

www.archive.org gives a good impression of what the website looked like before. But as an ancient excavated ruin, only the structure remains. The content, the images : gone too. Forum links don’t redirect to the actual topics to rather redirect to the current website 404 page instead. As many of Web 2.0 websites with dynamic content, www.archive.org fail to return a comprehensive snapshot of the website in its entirety.

It seems that we have accepted that whole years of content, that produced on all these websites developed and disappeared between the appearance and the end of web 2.0 and the static sites and the advent of centralized platforms such as Facebook (although the content is no longer permanent there either). Today, most of the nostalgia expressed about the “old web” is about all these amateur 1.0 websites Geocities-like and not about the 2.0 websites and forums which however were for a whole generation the first contact with the Internet, and even for the previous generation, the first active contact with the Internet, because it was now possible to produce content and share it with others without any computer knowledge.

I wonder if it’s for purely aesthetic reasons : in the same way we’re more nostalgic for cute 2D video game graphics than for the bleak and clunky first 3D games, we prefer these colorful and kitsch personal websites, perhaps because they give us the image of a comfortable and cozy past in which we want to abandon ourselves while listening vaporwave music. I don’t think there is anything substantial in regretting these websites whose content was often interesting, and wrong sometimes. Wikipedia does a far better job of explaining to you the history of Pixies than SurferRosa1969 that just copied articles from the Rolling Stones magazine on his website. If you don’t believe me, go search www.archive.org, and you’ll probably find a full snapshot of his website in 1997.

But the maleficent incantations of the Empress Pazuzu Pesta or the eloquent speeches of Prime Minister Fidel which brightened up my teenage years on kraland.org are gone. Forever. Like, probably, their counterparts on the similar websites you were consulting at the time.

I have many memories of the years I’ve played Kraland Interactif, kraland.org’s main component (alongside a mini-game inspired by Civilization, political forums, etc.). I met there some of my very best friends. But instead of telling you my old memories like a nostalgic grandpa, let me rather tell you the game sequence that I remember the most today.
As a citizen of the Confédération Libre (Free Confederation, a kind of perverted Athenian democracy), I joined a political party ruled by old and venerable citizens that quickly chose me to represent them at the upcoming Presidential Election. I won this election, well helped by some genuine votes but mostly by a gigantic ballot box stuffing. Once elected president, I appointed my cabinet of ministers, which I quickly lost control of. They indeed started a massive embezzlement of public money, in which I ended up taking part. At the end of my presidential mandate, and now wanted by the police, I left the country to join the Palladium Corporation, a mix between a libertarian country and a banana republic. Then, I founded my own corporation, relying on local gangsters. One day, one was stuck in a building in a city next to mine. He asked me to go there to recover stolen loot and bring it to another building not guarded by the police, which I did. The next day, I discovered in my own garage a sports car, offered as a gift by the grateful gangster.

What may look like a role-play sequence written on a forum was in fact a pure sequence of actions and orders taken using clicks. All the expressions above written in italic correspond to a specific order implemented in the game. Kraland Interactif was offering hundreds of action, some being very basic (moving from one case to another), others being specific according to your career, your position, your empire. You could be a citizen of the Stalinian-like République of Kraland, of the Nazi-Mordor-like Empire Brun, of the Libertarian/Banana-like Palladium Corporation, of the theocratic Théocratie Séelienne, of the primitive and clannish Khanat Elmerien, of the democratic Confédération Libre, of the radically environmentalist Paradigme Vert. These seven empires, having all a very rich background, were ruled by a leader (whose title was changing according to the Empire, from Prime Minister to Emperor) and nine ministers (War, Justice, Foreign Affairs, Economy, Research, Interior, Information, Secret Services, Labor), over a world made up of about a hundred regions, all of which also had their own background, themselves being divided into cities. Each region was ruled by a Governor, helped by a Captain, a Procurer, a Steward and a Chief of Police. Each city was ruled by a Mayor, a Sergeant, a Judge and a Police Commissioner. They could make Official Statements, raise taxes, authorize or forbid hundreds of raw material of objects (like: pie cream, watch, kayak, hot air balloon, stethoscope) all of which can be made from other objects and specific buildings (Sawmill, Forge, Inn, …) that also had to be built and managed by players on the city map. 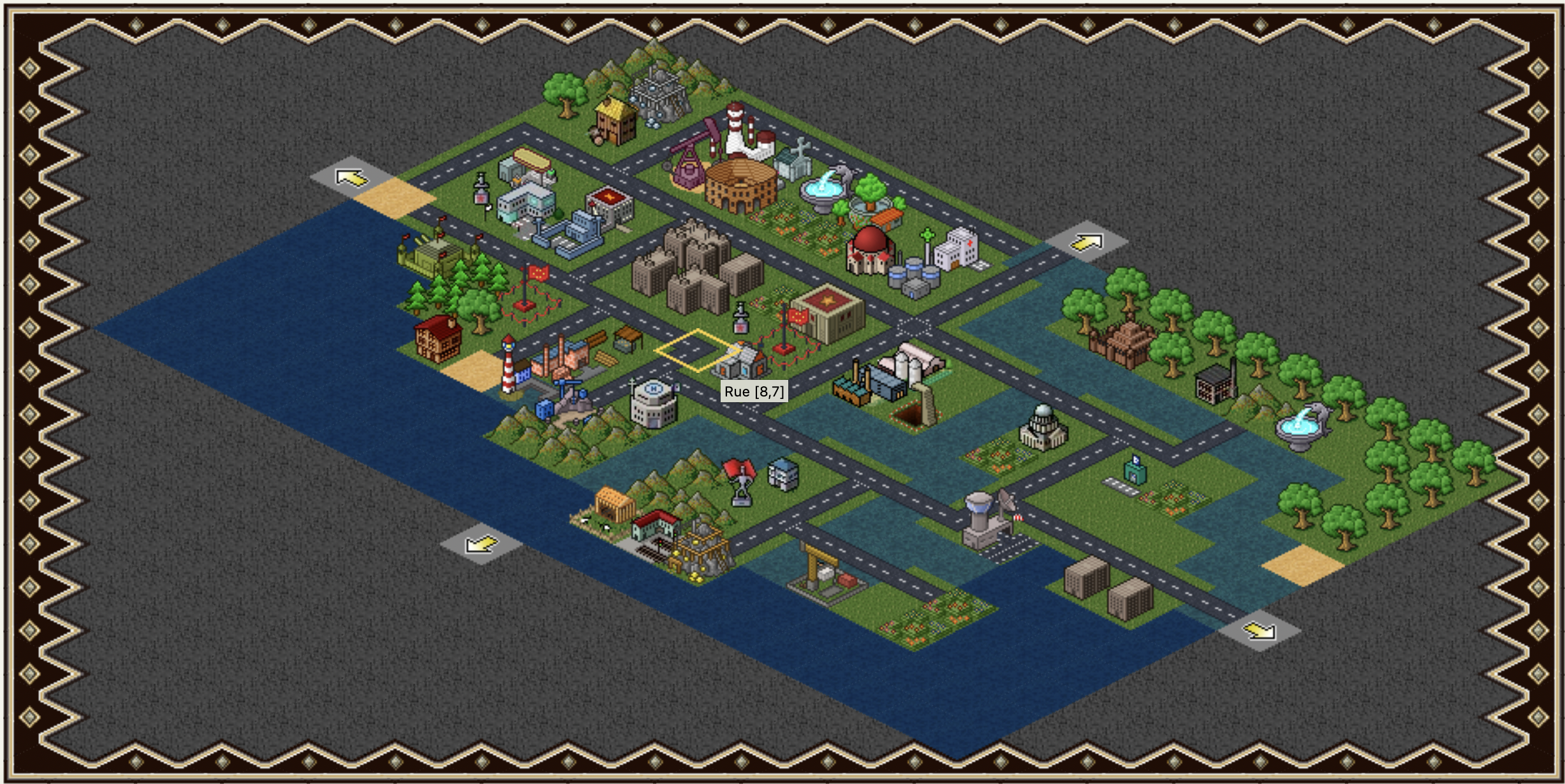 I’ll spare you the list of twenty “Vocation of Powers” available for the Magicians and Sorcerers and those of “Political Vocations” (just know there was Warmonger, Reactionary, or Legalist, but also Barfly).

Depending on his career, his vocation, and his position, a player had access to different orders and to bonuses or penalties affecting the success of an action. There were some player-level characteristics (Strength, Will, Charm, Management, Intelligence, Perception) or Skills (Fight, Medicine, Faith, …), but also some Empire-level indices (Economic, Military, Ideological, Scientific), which could influence the outcome of an action but which players could also increase or decrease, according to their side.

What was remarkable in kraland.org was that there were never two players who shared the same goal. On my end, I was rather a political player. I’ve never cared too much for the numbers and spent most of my time on the forums, making megalomaniac political statements. As many professional politicians, I lacked skills and education, but I had a big mouth. But I had a friend that was on its end passionate about the economic possibilities (so much so that he even studied economics): the game gave him the opportunity to optimize the entire economy of his empire (routing of raw materials and processing, immigration laws, taxes, etc.) to make it the most economically powerful. Finally, there were some who weren’t interested in role-playing at all and who considered the other players as pure PNJs. They were playing Kraland like they would have played Morrowind. Usually, they pursued a criminal career (making heists, escaping the penal colony, etc.) or an entrepreneur one (there was a player that owned entire regions, enjoying an absolute monopoly).

Fifteen years later after my last hours of play, I’m still puzzled how such a game could exist. It has a depth that I have only encountered in the most complex Paradox games (like Victoria), while being more accessible and multiplayer. It has been developed by a single developer (that we called webmaster at the time), called red*star, on his free time. As a young aspiring software engineer, he was one of my role models, alongside Bill Gates and Hideo Kojima. The game has had six versions, some of which have had a very long development time. I don’t remember any major bugs, nor painful imbalance between players. Some of them were probably too powerful, we called them grosbill or abusator, but it was part of the charm of the game. From what I know, Kraland was running on a single dedicated server, with the classic PHP + MySQL combo, and probably nothing else, hosted at OVH. It was free, almost free of ads too, and basically self-financed, with the exception of a few donations.

Kraland Interactif still exists today, and you can still create an account to play, but the very low number of players led red*star to close several empires and divide the size of the world by five. Most of the political positions are now vacant too, and the player activity very far from what it was in the past.

But I don’t think there is anything to regret. The site flourished in a particular era. What I deplore the most, as said above, is that there are so few testimonials about Kraland and its counterparts. I can’t believe this amateur Belgian site frequented by at most 15,000 users at a time could have been the only one in its kind. I can’t believe there was no Kraland in America.

The only video game I know that in my opinion could come close to my personal experience with Kraland is EVE Online. It is much different in its scale, in its technology, in its model, and I never played to it, but I remember reading stories of interplanetary conflict that reminded me of Kraland Interactif’s Cyberworld wars. Also, the freedom of action in Eve Online seems close to Kraland’s: you can be a merchant, a bandit, a diplomat or a journalist, whatever.

I wonder what will remain of these games, whose history has been written on ephemeral media. Two years ago, I reviewed a book about the beginnings of video games in France. I found when reading it that most of the game designers of these prehistorical games were unknown and moved on to something completely different after a few years in the embryonic game industry. Without the efforts of the authors of this book, their careers and their creations would be forgotten today.

Many browser games from the early 2000s could follow the same path, and perhaps in an even more dramatic way as unlike the video games of the 80s, it is now impossible to resuscitate them. These games were not contained in a source code, they also contained in their database, in the interactions between their members, in their very history.

Writing this article, I feel like an old Celtic druid passing on essential knowledge to his apprentice. What a weird thing, in the age of the all-powerful internet, to have to rely on oral history.

If you want to know more about Kraland: